Fun with Prisms in Ophthalmology What happens to light when it enters a prism?

Prisms made of glass are calibrated in Prentice position. They should be held with the back surface perpendicular to the line of sight.

Plastic prisms and prism bars are calibrated by the angle of minimum deviation. They should be held with a back surface parallel to the face or in the frontal plane position. 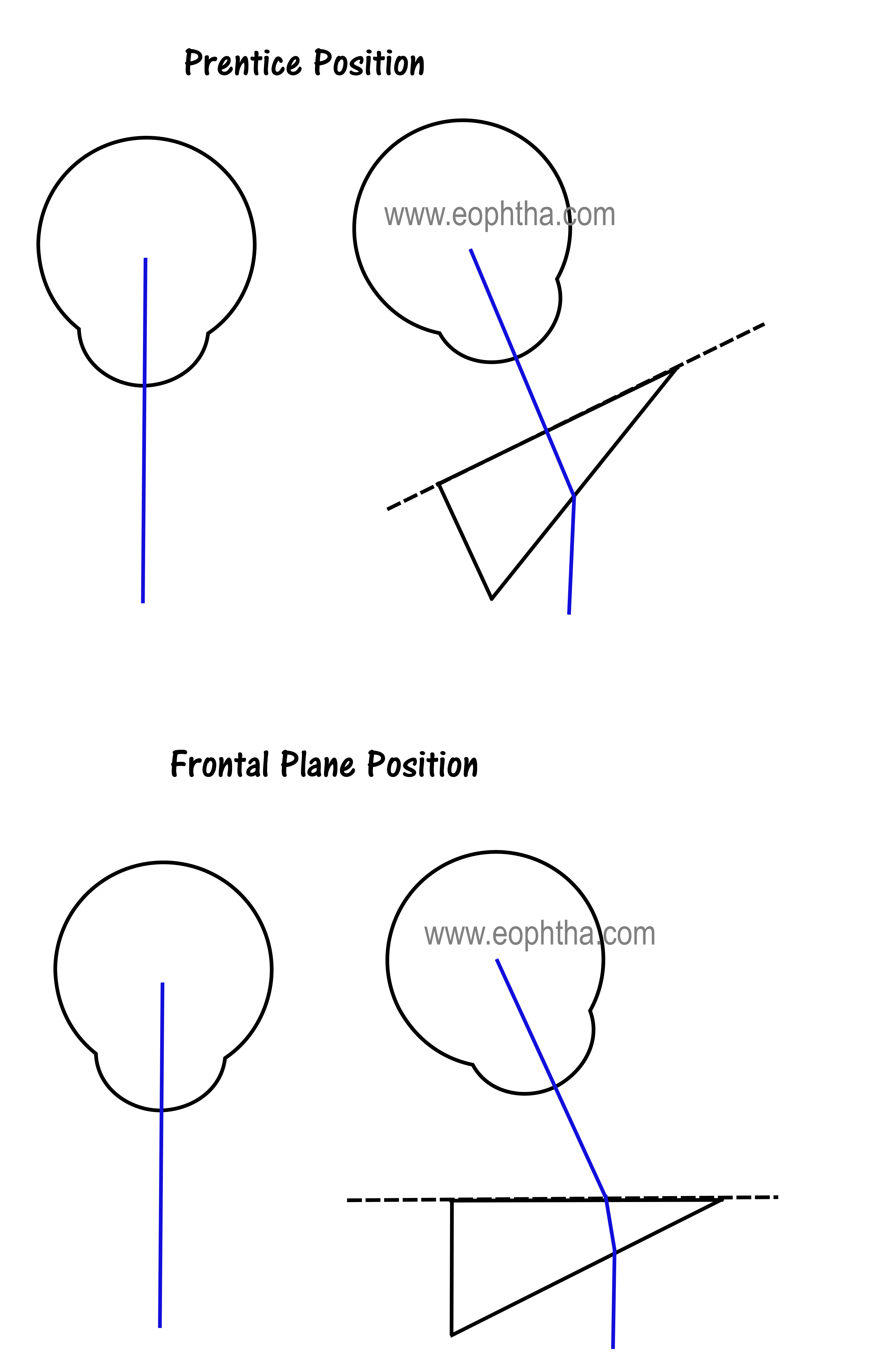 The shift in Image with Prism The firstpicture shows the patient fixing at object X

Second picture: A prism is introduced which displaces the retinal image off the fovea towards the base causing the perceived image to move towards the apex (image jump).

There are three important concepts one needs to be well versed as regards to prisms:

How To Use Prisms To Measure Deviation: 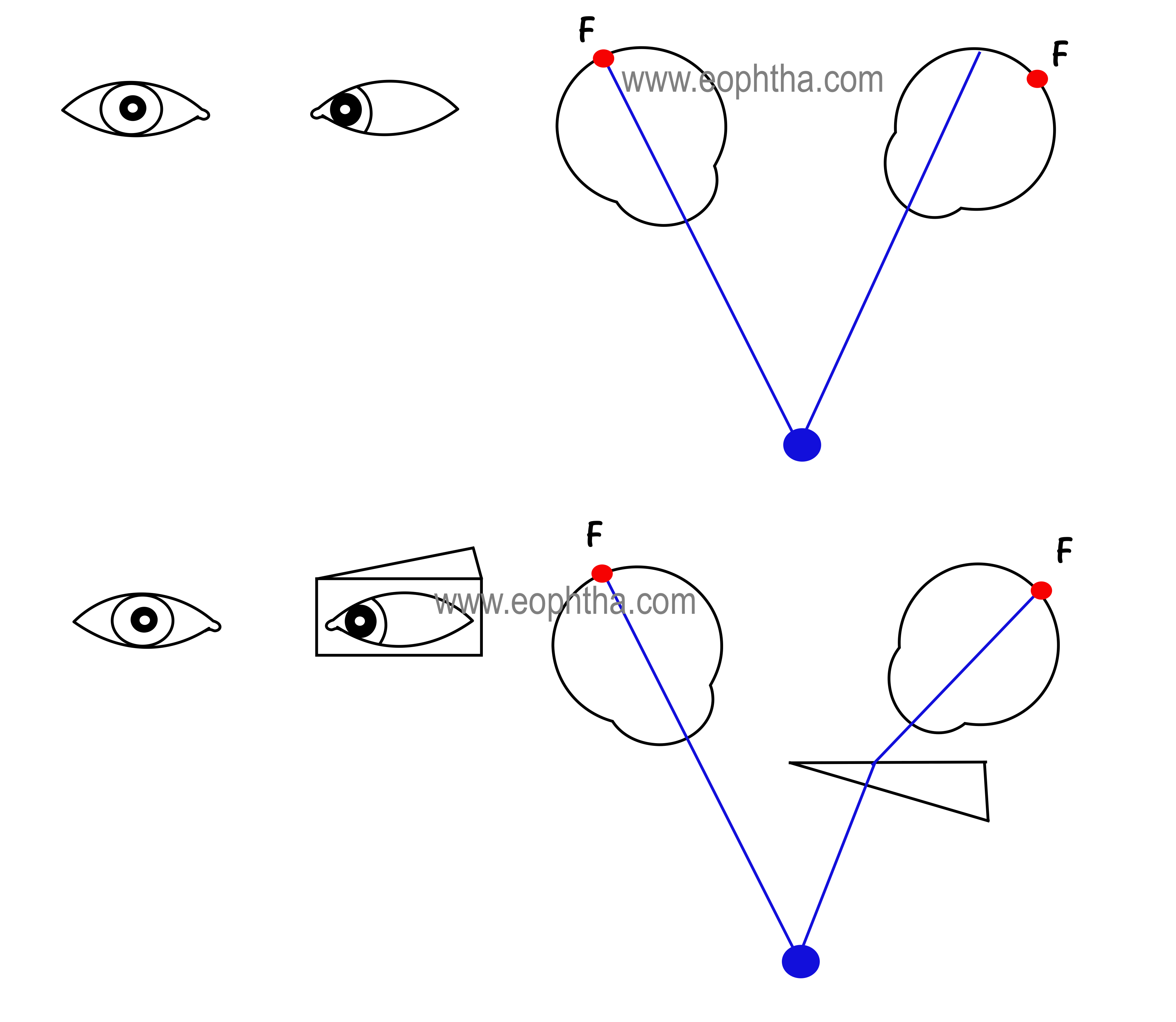 IMPORTANT CONCEPT: Always orient prisms with the apex in the direction of deviation. 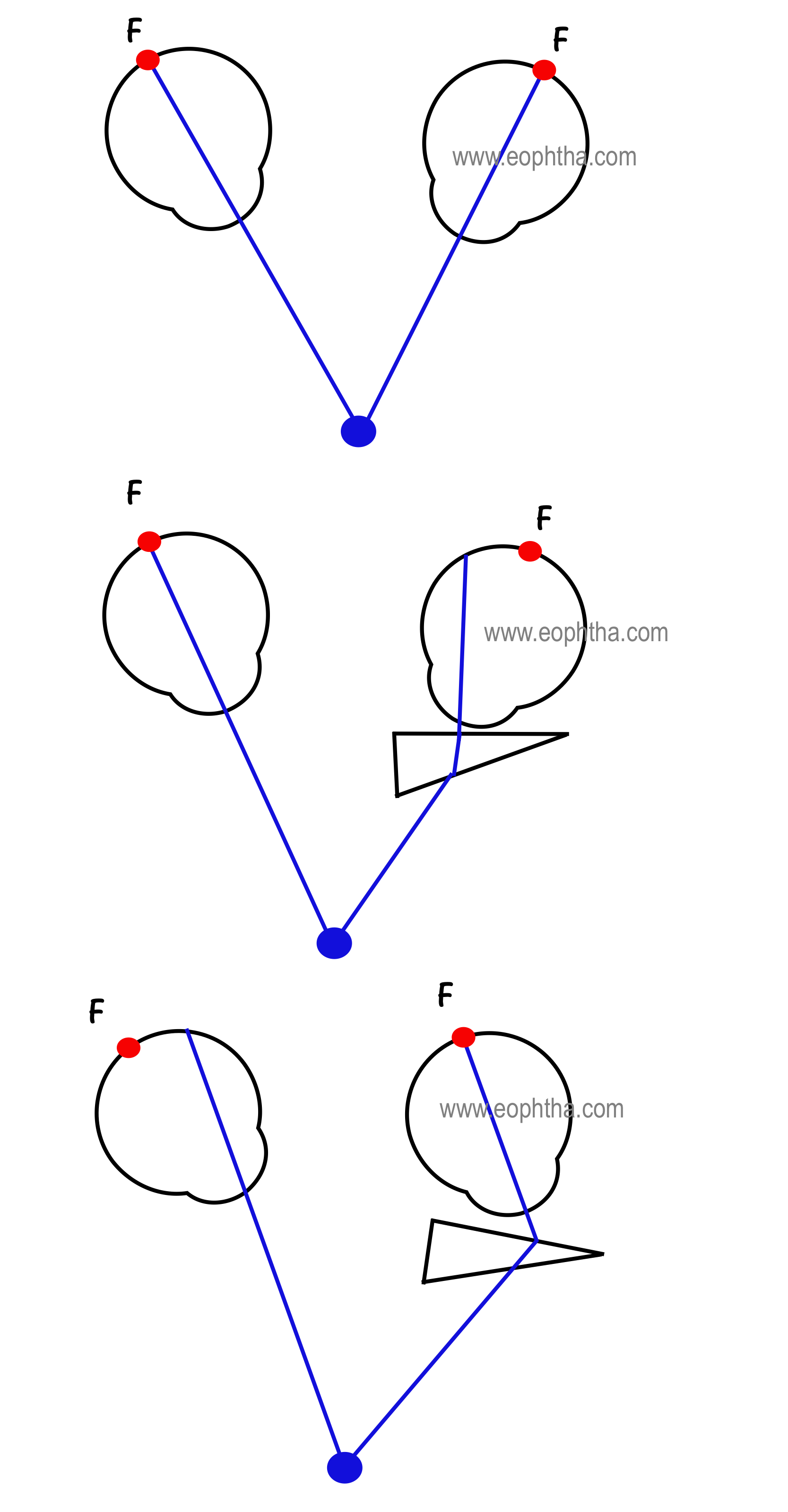 Patient with straight eyes (ORTHOTROPIA) and binocular vision is made esotropic by placing a base-in prism over one eye (in this case left eye). When a BASE IN prism is introduced the retinal image is displaced nasal to the fovea in the left eye. To place the image on the fovea the left eye moves temporally and therefore as per Herring’s law the right eye moves nasally and hence the retinal image is displaced nasally off the fovea in the right eye. Since base in prisms displaces retinal images nasal to the fovea, they produce optically induced esotropia. This is the basis for the induced tropia test used to detect suppression or amblyopia in certain cases. BASE OUT prisms produce optically induced exotropia.

When prisms induce optical esotropia as in BASE IN PRISMS they cause fusional divergence.

When prisms induce optical exotropia as in BASE OUT PRISMS, they cause fusional convergence,

Second Picture: optically induced exotropia due to base out prism. The base out prism causes retinal image to be displaced temporal to the fovea. The left eye moves in and the right eye moves out as per Herring's law. 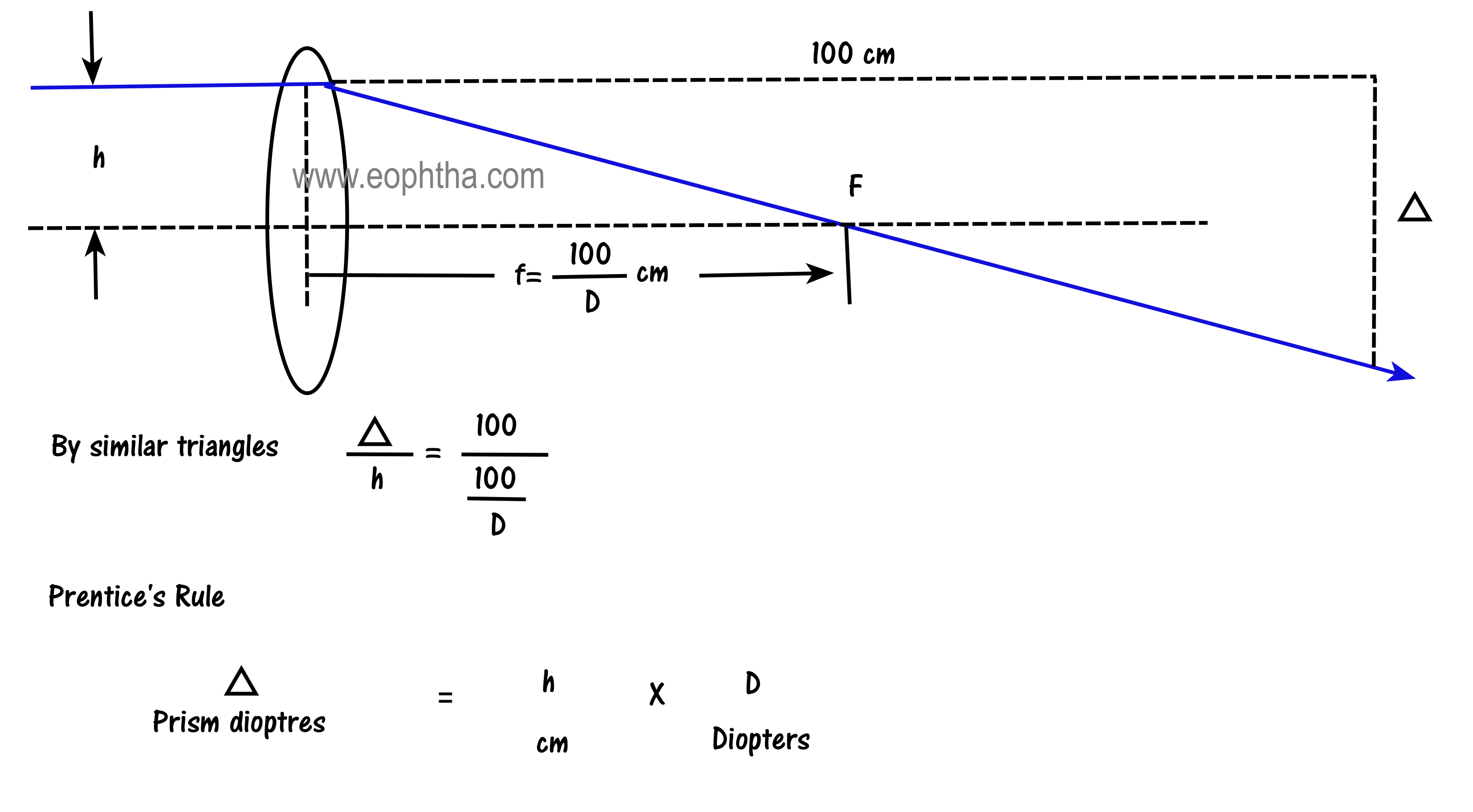 For example, an exotrope of 40 PD wearing -10.00 DS glasses will measure

What is IMAGE JUMP?

It is produced by the sudden introduction of prismatic power at the top of the bifocal segment. The object that the eye perceives in the inferior field when looking straight ahead suddenly jumps upward when the eye turns down to look at it. Fresnel prisms are side-by-side stacked up linear strips of long, narrow, thin transparent prisms. Plastic Fresnel prisms are available as press-onTM prisms from 0.5 to 40 PD for application to the rear surface of spectacle lenses. They are convenient and lightweight but are difficult to clean, requiring periodic replacement. When prisms of larger strengths (more than 6 PD) need to be prescribed, Fresnel prisms are used. Horizontal and vertical prisms may be combined into an oblique prism by ordinary vector addition. Prescribing oblique prism saves weight, thickness, and cost in spectacles. In this case, for the left eye, an oblique Fresnel prism of 10 PD base up and out in the 37-degree meridian can be given instead of two prisms 6 PD base-up and 8 PD base-out.

Prisms and Chromatic Effects: Prisms split white light into its component colors because the refractive index of transparent materials is slightly different for a different wavelength of light.

Applications of Prisms in Ophthalmology

Ophthalmic Instruments that use Prism:

Since the basic lesson on prisms is over let us solve a prism puzzle now.A 10 PD prism is placed BASE IN before the left eye of a patient with perfectly straight eyes (orthotropia) at a distance and near.

A. Which way will a distant object appear to move, to the patient's left eye, when the prism is introduced?

B. Which way will the patient's left eye appear to be displaced to an examiner sitting facing the patient?

C. If the prism is held 2 cm from thepatient's eye, how far does the patient's eye appearto be displaced to the examiner?

D. Will the patient have to converge or diverge to compensate for the prism?

E. What type of deviation will be apparent to the examiner by the cover - uncover testing, with the prism in situ? C. 2mm.This is because a 10 Prism of deviation displaces light rays 10 cm at 100 cm from the prism. Therefore, the displacement at 2cm is

D. Diverge because the line of sight has been directed inward by the prism.

E. The patient will have esophoria on the cover- uncover testing, for the fusion- free position measured anterior to the prism is an esodeviation

Prisms are an integral part of ophthalmology. Concepts need to be well understood which makes prescription of prisms an easy game for anyone and it will definitely be a game-changer for your tricky troublesome patients!

Dr. Manjula Jayakumar
Senior Consultant and in charge of Pediatric Ophthalmology and Strabismus, Dr. Agarwal's Eye Hospital, Chennai
An alumnus of Sankara Nethralaya, Chennai. Best postgraduate student for that academic year .Trained in pediatric ophthalmology and Strabismus at Sankara Nethralaya. Over 22 years of experience in Pediatric ophthalmology. Recipient of the Harbinger Award of clinical excellence at Vasan eye care. Now working as a senior consultant, in charge of Pediatric services at Dr. Agarwals eye hospital and research center, Chennai. Interested in surgical innovations. Published a single staged procedure that can be combined with inferior rectus recession in MED which is not possible with the conventional Knapp procedure. Combined augmented Lateral rectus transposition with inferior rectus recession for Monocular elevation deficiency published in JAAPOS 2018. This is a single staged procedure that can effectively correct MED. The other surgical innovation is Modified Faden .Modified Faden operation , a new surgical technique using single double armed non absorbable suture was published in IJO in 2019. Recepient of the BEST OF IJO AWARD by AIOS for 2020 for the same publication. Actively involved in clinical work, research and teaching at the institute.
Graphics: Parthopratim Dutta Majumder